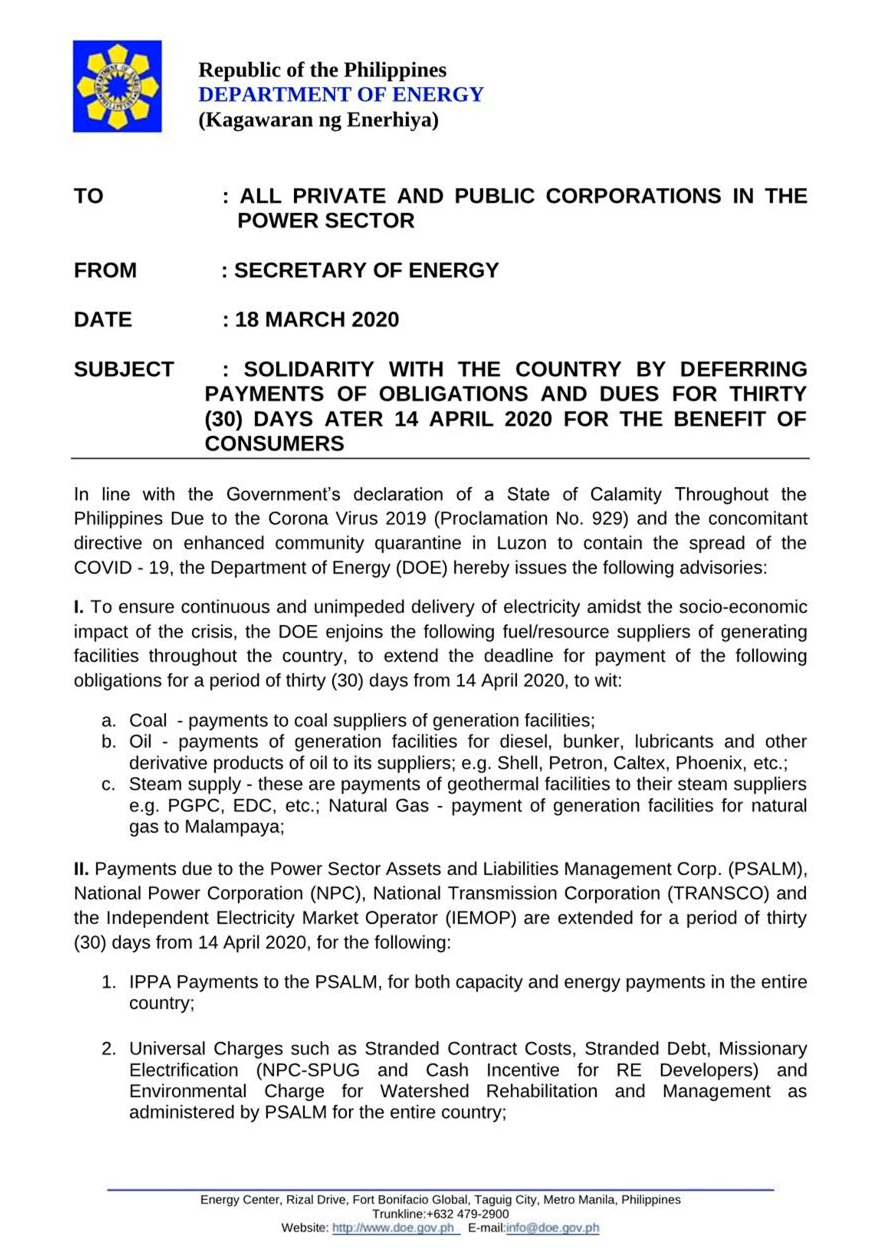 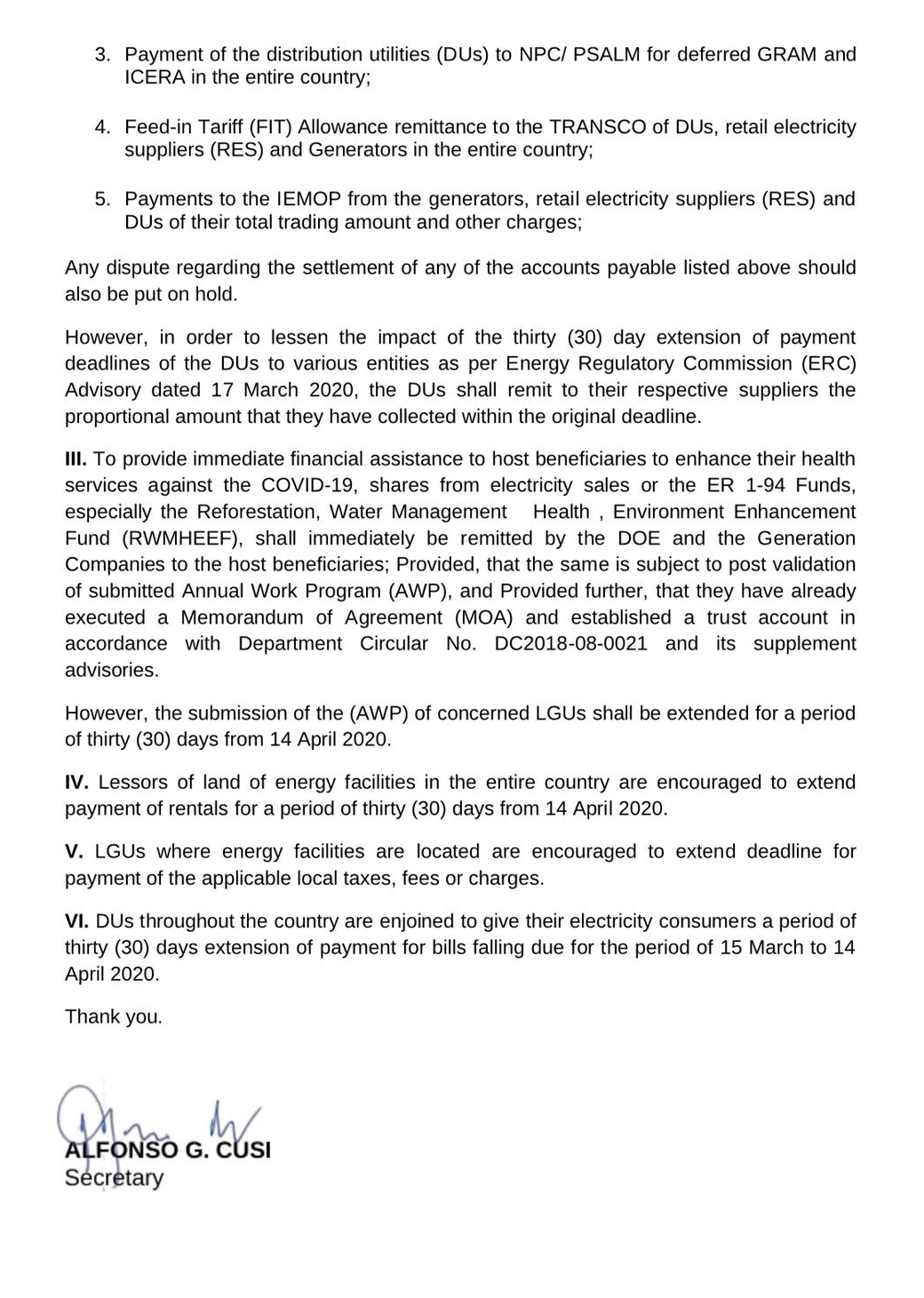 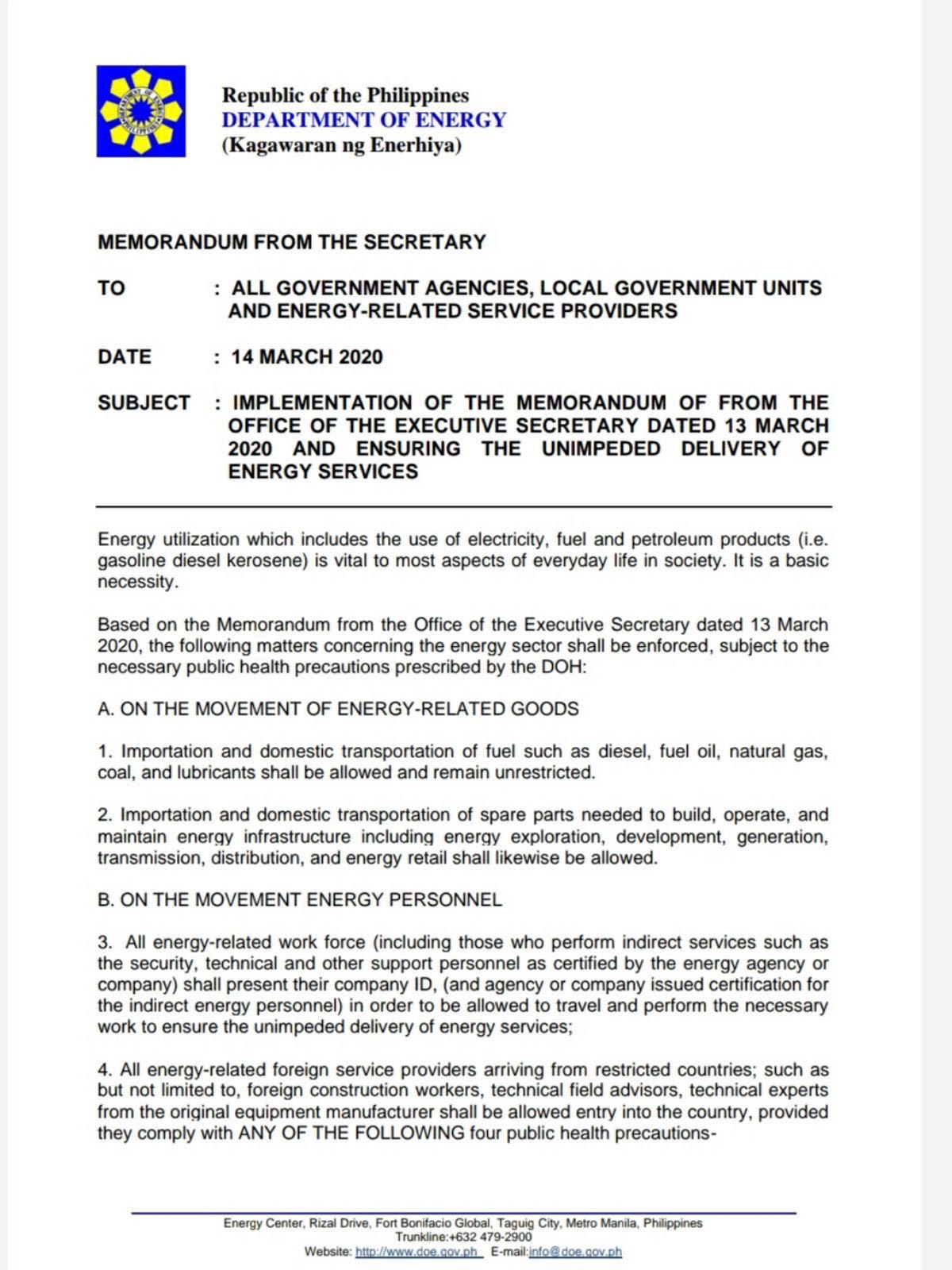 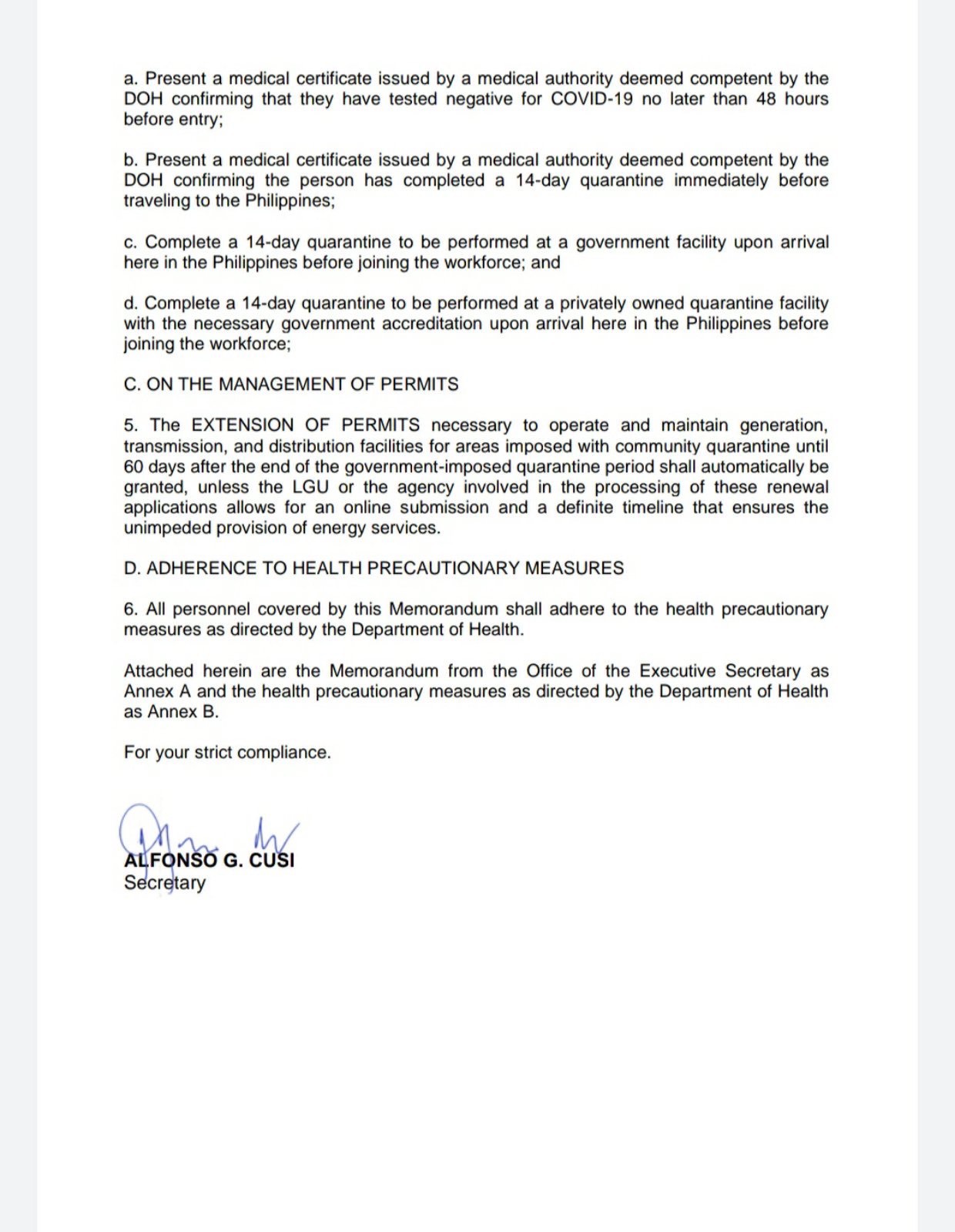 In the ongoing saga of the MVP Group’s money making schemes to also monopolize power generation and charge Meralco customers self-negotiated sweetheart electric rates for the next 20 years,  the cause oriented group Alyansa Para Sa BagongPilipinas (ABP) had petitioned and the Supreme Court had spoken that ERC’s extension of the date for the effectivity of the CSP policy is beyond its authority and therefore illegal. Consequently all power supply contracts that were applied with the ERC after November 7, 2015 should undergo competitive selection process or bidding.The biggest lot of those is Meralco’s seven (7) PSA totaling 3,551mw with a guaranteed 28 Billion kwh a year sales for 20 years, fully 80% of the energy needs of the National Capital Region.

In its ruling GR 227670 the Supreme Court not only ruled on that issue but also reiterated enlightening provisions of the Constitution on other aspects of jurisdiction, governance, and autonomy related to ERC that the regulatory agency had been ignoring for a long time. If heeded, these constitutional reminders would have long term implications on the ERC and DOE as oversight institutions for the public interest.

Here are some excerpts of the Supreme Court Decision:

Section 19, Article XII of the 1987 Constitution provides: “The State shall regulate or prohibit monopolies when the public interest so requires. No combinations in restraint of trade or unfair competition shall be allowed.”

Section 6, Article XII of the 1987 Constitution provides: “The use of property bears a social function, and all economic agents shall contribute to the common good. Individuals and private groups, including corporations, cooperatives, and similar collective organizations, shall have the right to own, establish, and operate economic enterprises, subject to the duty of the State to promote distributive justice and to intervene when the common good so demands.”

Indisputably, the use of electricity bears a vital social function. The State, in requiring competitive public bidding in the purchase of power by distribution utilities, has exercised its constitutional “duty x xx to intervene when the common good so demands. “

Considering that the legality of the Meralco power supply contract applications have delayed the power development of the country by 3 years, the compelling question is what will the affected institutions, ERC, Meralco and its 5 partners, and DOE, do? Will they continue fighting the legal issue, protract the impasse,  and not care about the delay in the nation’s power supply? Will the consumers be held hostage again and will the government passively watch as Luzon’s power supply deteriorate?

The new ERC will be tested on what they hold important, Self-interest or public service? Will they continue fighting for their domain over the power sector and put self-empowerment first over focusing on averting a power crisis by starting in earnest to making enough of the Meralco projects comply with legitimate CSP?

a. Jurisdiction, power, and autonomy of ERC

Is the ERC willing to temporarily loosen its grip on its empire?

Almost from the beginning, the series of trapo politicians that were made Chairmen of this supposed public interest agency from 2003 to 2018, worked hard at protecting its power and jurisdiction over the power industry domain. As politicians steeped in the culture in Congress, they evidently wanted absolute power over a sector that the private entrepreneurs and oligarchs discovered they can profit handsomely, especially if they capture the regulators. The seasoned politicians effectively kept at bay past attempts by the DOE, Congress, and the Courts to influence the regulatory agency’s power by arguing they are an independent body and stigmatized any input from other government agencies as “meddling”.

This assertion by ERC of absolute power led to the regulatory agency’s total disregard for power policies set by the Department of Energy, the mandated policy making body under the EPIRA law. ERC routinely tries to appear to be in synch with the policies set by the DOE but in the process of implementation, they exercise so much privilege that they often violate if the not the word but the spirit of the DOE policies.

In fact, on the ruling by the Supreme Court years ago that Meralco as a public utility should be entitled to only a 12% annual return on their investment, the ERC evidently felt they were above the Supreme Court when they adopted the rate setting methodology PBR that effectively deregulated the profits of Meralco who is now making officially 25% return on equity.  Asked in a hearing on PBR, two senior commissioners declared in open court that they did not have to follow because the Supreme Court ruling was “no longer applicable when ERC changed the methodology to PBR and that the 12% return is no longer valid because “economic conditions had changed”. (Who brainwashed them?)

It is under this kind of hubris that the ERC evidently felt they can get away with fooling around with the implementation of the CSP policy from November 7, 2015 to April 30, 2016, despite them turning down Meralco’s request as late as January 2016 to be allowed to do swiss challenge type CSP.

What happened in February 2016 that made ERC change its mind and incongruously “clarified the implementation date of the CSP to April 30, 2016, a full 176 days after the original date? Most Filipinos can guess correctly on this one.

b. ERC’s mandate under the Epira Law

RA 9136 or the EPIRA Law of June 2001 indeed gave ERC a lot of power, many of them even motuproprio and all for the purpose of protecting the public interest. The most important of which is insuring the fair and reasonableness of the rates. It is true that previous ERC’s invoked those other non-rate setting powers like Section 43 sub-sections f,o,r,  whenever convenient but rarely in the genuine intent to serve the public interest.

Now the Supreme Court is saying they must implement only the policies laid down by the Department of Energy which had the effect of law. And we interpret that to mean not to exceed or contradict one whenever a policy had been established by the DOE.

A current case in point, the DOE had issued in February 2018 a Guideline for the procurement of power supply for the Distribution Utilities. And the ERC has been working on coming up with its own implementing guidelines of such policy. It is now in its 3rd draft and interestingly, while the DOE circular and expressed clarifications did not provide for unsolicited proposals or swiss challenge type biddings, ERC’s guidelines is devoting fully 1/3 of its pages to rules on unsolicited proposals and swiss challenge.

So the question is will the new ERC now respect the authority of the DOE to set policies and rules and not freelance and exercise privileges with their own implementation rules?

c. Will there an advent of a New DOE?

DOE is the reverse of ERC. They were given a clear mandate by the law to insure that there would be sufficient supply and least cost power with broad policy powers.  For many years they seem to have accepted that their job is to formulate and issue policy. And be contented that the implementation is left up to the discretion of the ERC, NEA, NPC, PSALM, come hell or high water.  One recent Secretary of Energy lamented that they don’t have enforcement capability, a sad perspective.

For the last 15 years one reality has been hitting DOE and that is when things are going wrong in the power sector, regardless of privatization and deregulation, it is the DOE that the people and the legislators are holding responsible.

In the recent case, yellow and red alerts started lighting up in the Luzon grid, and the JCPC called the power players to hearings. It was admirable that the DOE officials were trying to explain except they really could not provide the answers and solutions to the mysterious coincident downtimes of the power generators in Luzon.  The reason is it is really Meralco, to whom those power plants are contracted to, who is capable of ensuring the performance of these power plants and shepherding their downtime schedules.

It is evident they themselves feel it is DOE’s responsibility to make sure there is enough power supply and reserves and that the prices do not skyrocket. But they must stop thinking that their job is passive and only persuasive in making things happen.

Now the Supreme Court had clearly spoken.  It is the job of the DOE to establish policies and guidelines and those will have the effect of law.  ERC’s job is to implement the policies set by the DOE.

It is true that in the past the ERC was forced to write more implementing guidelines to executive the vague and motherhood guidelines set by the DOE or where the later had not written one.  For example, the implementation of Section 45 of the Epira law on limiting the market share of the owners of Meralco to only 50% of the power utility’s demand and energy needs. Some people managed to dilute the Epira law by writing a different way of implementation under Rule 11 of the Epira IRR in 2004. This has been paving the way for the MVP Group that controls Meralco to covet 100% of the contracts of Meralco’s power supply….. because they could.

But since the DOE had evidently not even recognized the illegality of Rule 11 through the years, the ERC had been implementing it in their own way and in their own time.

Now the DOE needs to step up and provide clear guidelines, monitor their implementation, and take proactive action if say power supply is not materializing on time.

This will require DOE to remake itself from a passive issuer of policies and rules and gatherer of statistics on evolving power development, to a proactive enforcer and pursuer of pow