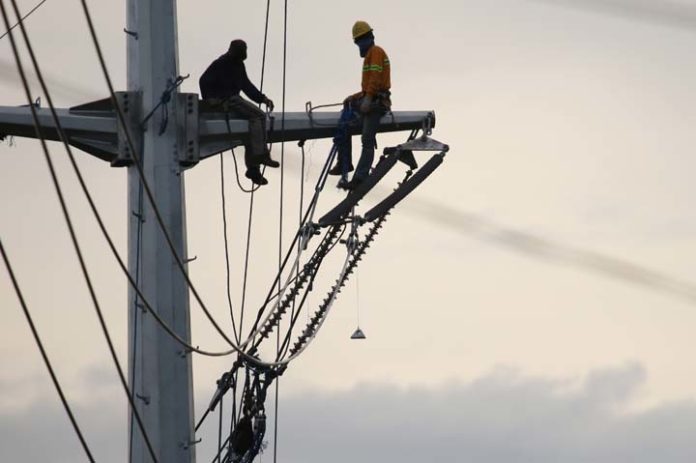 In File Photo: Linemen from the National Grid Corp. of the Philippines conduct a maintenance check on power lines to ensure the reliability of electricity supply in the Luzon grid.

MORE than 4,500 megawatts (MW) was shaved off Monday from the Luzon grid, mainly due to a number of power plants that are on scheduled shutdown, forced shutdown or declared a reduction in their capacity.

The situation prompted the National Grid Corp. of the Philippines (NGCP) to place Luzon on yellow alert notice from 11 a.m. to 2 p.m.

Included in the list of power plants that went on forced outage are those that conked out due to Outside Management Control—control of the power generation firm and did not result from planning error or negligence.

A total capacity of 1,261MW came from the power plants that went on forced outage.

A yellow alert is issued when operating reserves have dropped below the required 647MW contingency in Luzon, or equivalent to the largest unit in Luzon, which is the 647-MW coal-fired power plant in Sual, Pangasinan.

Meanwhile, the Department of Energy (DOE) wants power generation firms to submit a three-year planned outage schedules for their power plants to the NGCP, from the existing one-year period.

The DOE is soliciting comments from industry stakeholders on the proposed guidelines on planned outage schedules of power plants.

The draft circular states that the NGCP shall device a mechanism to come up with an optimal generation and transmission planned outage schedule which shall be the basis of the Grid Operating and Maintenance Program (GOMP).

NGCP shall then submit to the DOE the GOMP every third quarter of the year for review.

“The first year of the GOMP schedule shall be considered binding and can be changed during its implementation, subject to DOE approval. The second and third year schedules shall be considered indicative and reference for medium-term power supply and demand outlook,” it said.

The proposed rules were drafted following a series of red and yellow alert notices in the Luzon grid during summer, when the grid had low reserve level due to forced outages and deratings. Thin reserves led to the rotating power interruption in Metro Manila and some areas in Luzon.

The DOE also noted that the committed power generation projects and their associated transmission projects, which are expected to augment the thin reserves in Luzon and Visayas, have experienced delays in meeting the target commercial
operations.

“Now, therefore, for and in consideration of the foregoing premises, principles and mandates of the Epira (Electric Power Industry Reform Act), the DOE hereby issue, adopt and promulgate this Circular,” it said.

The DOE has set the deadline for the submission of comments on December 13.