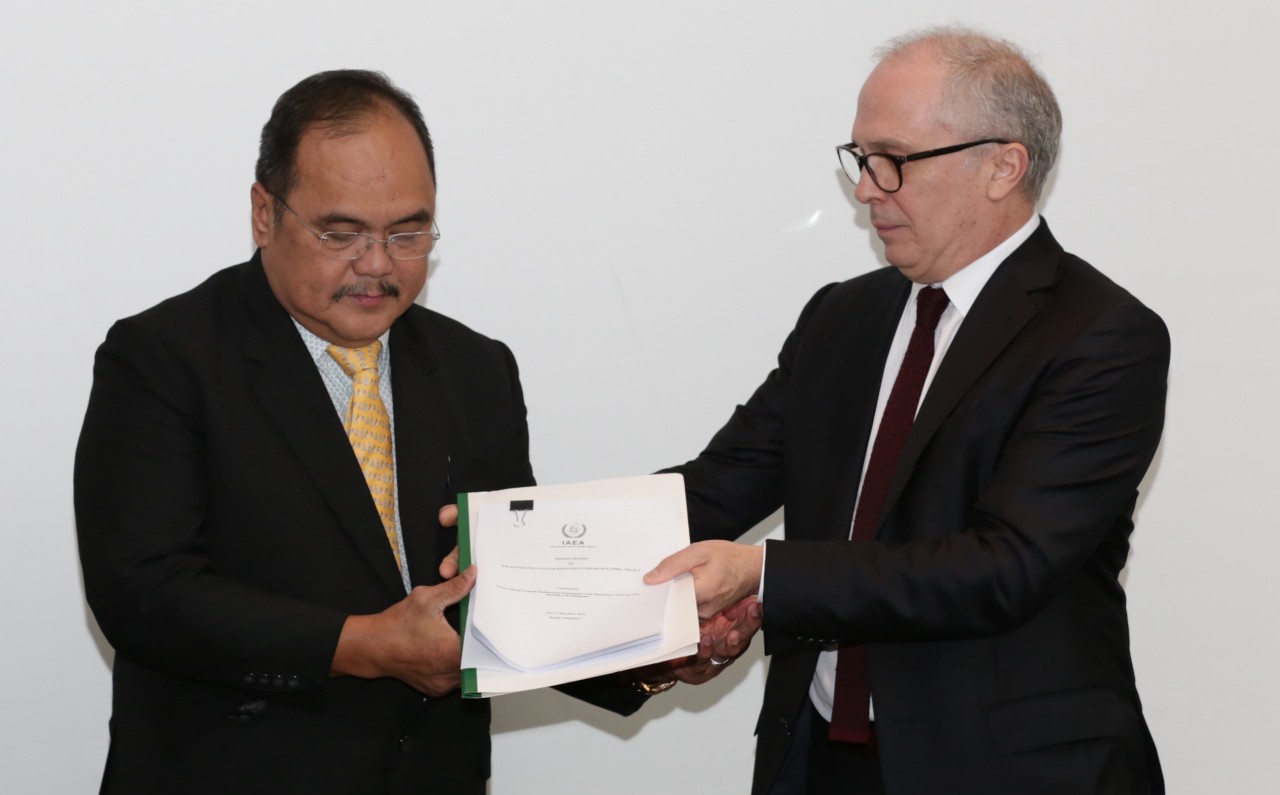 This was verified by the International Atomic Energy Agency (IAEA)-Integrated Nuclear Infrastructure Review (INIR) mission during the ceremonial turnover of its review results on Monday afternoon (December 17) at the Makati Shangri-La Hotel.

“The results of this INIR mission are the fruits of our hard labor. Our NEPIO remained dedicated and determined to address all the gaps within the two-year period on nuclear feasibility studies,” Sec. Cusi said.

“The results will help us focus our efforts on the identified issues, accelerate the legislative process and prepare the national decision,” he added.

According to IAEA’s Nuclear Infrastructure Development Section Head Milko Kovachev, the NEPIO has followed a systematic approach in finalizing the country’s nuclear power strategy and completing the associated infrastructure development.

The INIR team noted that the NEPIO has completed several studies and a draft legislation addressing nuclear safety, security and safeguards. In addition, the establishment of an independent regulatory body is already being reviewed at the Philippine Congress, as information on the matter is being disseminated to the public for stakeholder engagement.

The recommendations of the INIR team include involving a broader range of stakeholders to complete the work required to enable a national commitment to introduce nuclear power, and developing a legal and regulatory framework that ensures and demonstrates a commitment to safety, security and non-proliferation.

Other aspects include enhancing the approaches to human resource and leadership development, nuclear fuel cycle options and electrical grid impact, and adapting the existing national frameworks for emergency preparedness and response and nuclear security.

The INIR team also identified three good practices that would benefit other countries considering the introduction of nuclear power in the areas of legal framework, stakeholder involvement, and site and supporting facilities.

The INIR missions are based on the IAEA Milestones Approach, with its 19 infrastructure issues, three phases and three milestones. INIR missions enable IAEA member-state representatives to have in-depth discussions with international experts about experiences and best practices in different countries.

The results of the INIR mission are expected to help the member-state to develop an action plan to fill any gaps, which in turn will help the development of the national nuclear infrastructure.

“It is high time we put the framework in place to bring nuclear power into the energy mix. We should learn the lessons from the past and catch up with the missed opportunities,” Sec. Cusi concluded.