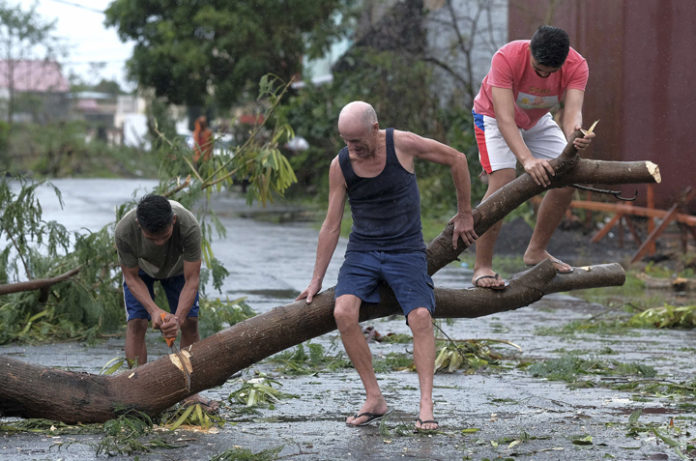 Men cut down a tree that fell due to strong winds as Typhoon Tisoy slammed Legazpi, Albay, on December 3.

Engr. Federico Villar Jr., acting director of NEA Disaster Risk Reduction and Management Department (DRRMD), said Wednesday the amount is expected to increase as many of the power ECs have yet to fully assess the extent of the damage to their facilities.

“As we continue to closely monitor the power situation in areas hit by the typhoon, rest assured that the NEA is ready to assist in restoring power and help our severely affected power coops get back to normal operations at the soonest possible time,” Villar said.

Some 26 ECs from Ilocos, Cagayan Valley, Central Luzon and the Cordillera Administrative Region are sending 159 line workers and support personnel with boom trucks and equipment to assist power distribution utilities in the typhoon-hit provinces.

Last December 4, Eastern Visayas ECs also sent crews to Northern Samar. They are part of the Task Force Kapatid Typhoon Tisoy, a special unit of line workers strategically organized to quicken the pace of power restoration activities in the aftermath of disasters.

Based on its power monitoring report, as of 3 p.m. last Friday, the NEA DRRMD reported an estimated 1,476,719 households in 16 provinces in Luzon and Visayas covered by 26 ECs are still without electricity.